Weaving a Story of My Dreams 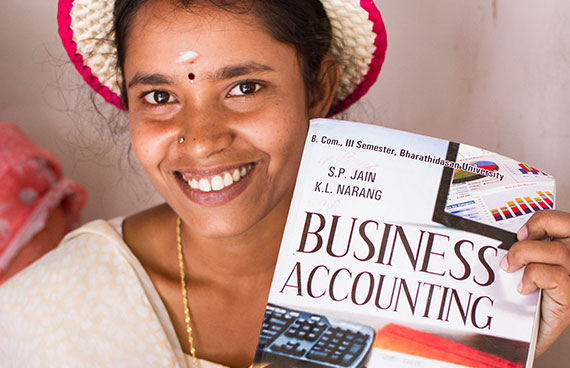 Name
Hemalatha
My Transformation
From unemployed to earner, trainer and college-goer.

I look back to the day my father died a few years ago and how it nearly ended all my dreams and aspirations. After appa passed away, we were besieged with financial troubles. As a family, we depended on him to bring in money to run the house. I realised that I would have to help run our home, but I didn’t know how. I was only a student and had no skills. We lived in the small village of Thennapattinam in Tamil Nadu.

One day I attended a Women’s Day workshop in my village organised by SST and a self-help group. It seemed to me that collectively, women could combine their skills to make some money.

So I approached SST social workers and told them of my problems. They asked me to form a self-help group in the village. I rounded up 14 other women.

We had plenty of palm trees in our village, so SST suggested we use local resources to come up with a business plan. SST then took us to an Entrepreneurship Training program in Nagapattinam, organised with the help of Mahalir Thittam project of Tamil Nadu Government. For two months, we trained under an expert and learnt to make small handcrafted items from palm leaves.

At the village, our self-help group started persuading shopkeepers in nearby pilgrim towns to stock them. Today, I save Rs. 500 a month. I am back at college studying for a post-graduate degree in Commerce at the Poompuhar Arts and Science College.

My greatest joy has been in giving back. Under the SST policy of ‘each one, teach one’, I’ve trained 23 women in palm-leaf handicrafts. I feel empowered through them.

SST approached Hemalatha to start a self-help group. SST suggested that she take a loan to study further. Unlike others, she did not want to take a loan. We then felt that selling palm-leaf trinkets could be a viable source of income because she was very deft with her hands. She could create wonderful puja baskets, jewel box and other items. She agreed, and the move paid off.

She started getting orders and began earning enough to pay for computer classes and a post-graduate course.

Today, she gets plenty of orders for jewellery boxes, flower vases, garlands and other items. One of her most popular creations is a rose design that’s a big hit with students. She is saving most of the money that she earns. Now, her mother worries that she will find it hard to find a suitable husband, because Hemalatha is such a go-getter.

Even today, when we decide to start a new class, Hemalatha will volunteer and conduct these awareness and skill classes for free. She is a real character, full of enthusiasm and a do-gooder. She will patiently explain things. She will also volunteer, and bring her mother for most programs.

Today, SST and the TVS Group have managed to get her orders even from corporates. She has developed a great belief in SST after we helped her own a stall at a few gatherings. She is now selling perfume boxes made from palm leaves that can be used in cars. She gets a lot of orders sitting at home. She’s also set up a shop with others to display her creations.

Villagers like their simple problems to be resolved, before taking big steps.

Identifying and making use of volunteers and social leaders is key.

If we are successful in convincing five people, they will take care of 50 people.

Patience is the key to working with villagers, as it takes time to gain their trust and get them to change their attitudes.