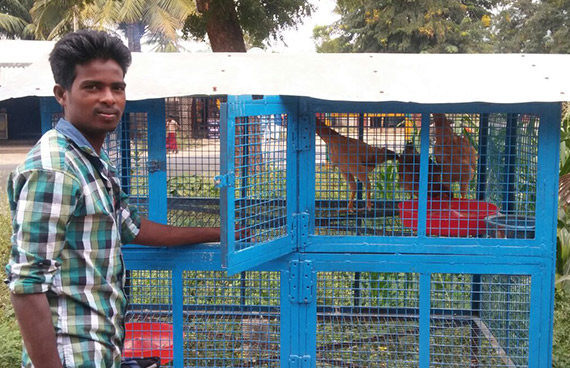 Name
P. Chinnathurai
My Transformation
From a college dropout to a hard-working entrepreneur

Whilst working on the family land of 2.5 acres in my village of Sadayan Kombai in Dharmapuri district of Tamil Nadu, I was also on course to complete my Bachelor of Science in Chemistry from the Government college in Namakkal. Suddenly my father’s health deteriorated and financial problems forced me to drop out of college.

My father came into contact with SST in 2013 as he headed a farmers group and had 25 chickens. It was really in 2015 after leaving college that I began to interact with them closely. A family friend, who resided in a nearby street in the village, helped us make contact with SST. SST advised me to start a mini-poultry unit with 50 birds. They liked my interest in poultry and asked me to focus on chickens. SST helped secure a bank loan of Rs. 25,000. I made a shed to house 300 birds and constructed another thatched shed to boost bird numbers to 500.

To improve my income, on SST’s advice, I recently opened a shop to sell broiler chickens. On Sundays, people from my village would travel 11 kilometers to Kottapatti town to buy chicken and fish. Now they can buy chicken from my shop, and I also plan to introduce fish. Today, my earnings have jumped to about Rs. 15,000 from Rs. 3,000 a month.

Ours is a large family of 10 people. A big chunk of the money I earn goes towards paying hospital bills for my father’s treatment. My younger brother assists me. I give him money for his education and other financial expenses. He is a great help and takes care of things in the shop when I am busy with other work. I have given my B.Sc final year exam and am awaiting the results. I am optimistic about the future and am hoping to expand my business with the help of SST. I have come this far; the future has to be better.

Chinnathurai was a perfect candidate for self-employment. He faced a lot of pressure from his father to leave the village and go to Tirupur or Coimbatore to take up a job. As a young 22-year old, he was interested in poultry farming and we convinced him that with some help and hard work he can be successful.

The odds were stacked against him. The family did not have much money. Chinnathurai’s second year college fees alone amounted to Rs. 10,000. Worse, he had to drop out of the course because of financial problems and his father’s poor health. The situation was grim.

We asked him to focus on poultry farming and helped him get a start. Chinnathurai worked hard and managed to balance his responsibilities with the help of his younger brother. Both support each other, and that was a big plus. Slowly, one step at a time Chinnathurai’s venture made progress. What’s heartening is that he even decided to sit for the exam to get his degree.

With Chinnathurai’s support the family has started cultivating flowers. Chinnathurai has also leased 300 coconut trees from a farmer. His brother and father are managing this business. With his chicken shop selling 20 kilograms of chicken a day and netting him Rs. 600 to Rs. 1,000, he has hired a shop assistant for Rs. 200 a day. He wants to expand his business and sell about 1,000 birds a day in a year’s time compared with the 100 to 300 he now sells. He has approached us for help to  arrange a Rs. 50,000 bank loan.

Chinnathurai is a good example of someone who follows good advice and executes plans perfectly. He is the master of his ship.

Self-employment is one of the best ways to help rural youth realize their latent potential.

Youth development and self-employment can translate into multiple benefits for the community in the form of employment and knowledge dissemination.

Once the youth taste success, they are easily motivated.